Unfortunately, I don’t have any of Hugh Brody’s books. Here are two article excerpts.

Life As A Hunter-Gatherer

Hugh Brody is a writer, anthropologist and filmmaker. From his experiences of hunter-gatherer culture gleaned from years of living and hunting with the Inuits of the Arctic and the salmon-fishing tribes in the Canadian Northwest, Brody reaches through everyday realities to reflect on the human condition.

Speaking to Outlook about his latest book, The Other Side Of Eden, Brody introduces us to the hunter-gatherer way of life and explores the misunderstandings and the historic division between hunter-gatherers and farmers.

Hunter-gatherers have always had a bad press. We think of them as primitive, whilst farmers are perceived as a definite step forward in human progress.

Having spent a great deal of his life living with hunter-gatherers Brody has not only observed, but he has attempted to absorb and truly understand people’s relationship with the land and is quick to dispel the myth that hunter-gatherers are uncivilised. He comments:

‘The thing about being with the Inuit is that you have a sense of being with the most gracious, most generous, most sophisticated of human beings. So far from being simple, they are very, very rich and complex.’

Language
Having spent time with the Inuit in the early 1970s and ’80s, Brody was privy to great opportunities. He travelled with dog teams, ventured in the snow and even lived in snow houses. Living and working with the Inuit people he reversed the colonial relationship whereby the Inuit’s way of life is considered ignorant, and instead he asked the Inuit to teach him about their ways.

Already fluent in French, German and Hebrew, Brody has also learnt two Inuktitut dialects, and considers language to be the key to understanding cultures. Language he claims ‘reveals different ways of knowing the world.’ He elaborates:

‘Colonialism constitutes them as ignoramuses (developmentally defective / retarded) – vessels to be filled with the truth. But if you ask them to teach you their language you give them a chance to reverse this – you are the one who doesn’t know anything. Instead of saying ‘seal’ you say ‘penis’ and they all laugh at you.‘

The much-quoted fact that Inuit language has 347 words for snow would however surely be a hindrance to learning the language? Not according to Brody:

‘Hunter-gatherer language doesn’t have categories, they don’t have conceptual terms like snow – they have very specific words such as “snow that has recently fallen” or “snow that is falling through the air”, “snow that has been driven in the wind” and it goes on and on. But they are all very specific pieces of information about the environment; they are all translatable and learnable (sic). There is nothing terribly difficult or mysterious about it.’

It seems that ASD Asperger types are not the only humans to use concrete language that is highly detailed and specific, especially in describing objects in the natural environment. This language is the basis of scientific observation. Would psychologists “categorize” the Inuit as “developmentally disordered”? YES.

Settlers and Nomads
To Brody the hunter-gatherer culture is one, which is both respectful of the planet and of its people. He discusses the Inuits relaxed attitude towards child discipline and marvels at their subsistence existence.

However he is aware that these can also be the very qualities that have led others to be dismissive of the hunter-gatherer way of life. Believing the popular conception of farmers as the settlers and hunter-gatherers as nomads to be untrue, he comments:

‘We have this idea that farmers are deeply settled in their places, whereas hunter-gatherers are roaming around like the beast of the fields …Integral to the story of farming is people going out on the land and colonising it.’

‘Colonising, frontiers and new settlements are absolutely at the heart of the story of agriculture. Whereas in fact hunter-gatherers are completely committed to one place because their success depends on their knowledge of the one place and their knowledge is not transferable.’

The Demise of the Hunter-Gatherer
The idea that farming is associated with a quest for more land has led Brody to theorise the demise of the hunter-gatherer. Central to the Inuit culture is a conviction that their land is ‘Eden and exile must be avoided’, if this is the case why do they struggle to control their traditional territories? Brody explains:

‘… have been driven out by the aggression and the very success of farming. Farming is a very brilliant device for accumulating surplus food and for having lots of children.‘ (overpopulation and its dire consequences)

Where farming is not possible, hunter-gathering communities continue to exist. Those who survive struggle to maintain their identity and, with more and more children attending English speaking schools, they fear that they will lose their language. Brody explains:

Are any other ASD / Aspergers thinking, “Yeah, that’s me!” regarding lifestyle preferences of hunter-gatherers and the “dimwitted” social typical misunderstanding of almost everything we do?

The rivers of northeast British Columbia are at their most splendid in the early fall. The northern tributaries of the Peace achieve an extraordinary beauty; they, and their small feeder creeks and streams, are cold yet warm—perfect reflections of autumn. The banks are multi-colored and finely textured; clear water runs in smooth, shallow channels. The low water of late summer reveals gravel and sand beaches, textures and colors that are at other times of the year concealed. Such low water levels mean that all these streams are easily crossed, and so become the throughways along the valleys that have always been at the heart of the Indians’ use of the land. In October those who know these creeks can find corners, holes, back eddies where rainbow trout and Dolly Varden abound.

The hunter of moose, deer, caribou (and in historic times, buffalo) does not pursue these large animals without regard to more abundant and predictable, if less satisfying, sources of food. The man who tracks and snares game, and whose success depends on his constant movement, cannot afford to fail for much more than two days running. On the third day of hunger he will find it hard to walk far or fast enough: hunger reduces the efficiency of the hunt. Hunger is inimical to effective hunting on foot; yet continuance of the hunt was, not long ago, the only means to avoid hunger. This potential source of insecurity for a hunter is resolved by his ability to combine two kinds of hunting: he pursues large ungulates in areas and with movements that bring him close to locations where he knows rabbits, grouse, or fish are to be found. These are security, but not staples. Hunting for large animals is the most efficient, the most rational activity for anyone who lives in the boreal forest. But such a hunter would be foolhardy indeed to hunt for the larger animals without a careful and strategic eye on the availability of the smaller ones.

In October, only a month after Joseph Patsah [elder of the Beaver clan] and his family first spoke to us about their lives, they suggested that I go hunting with them—and, of course, fishing. By now the rainbow trout would surely be plentiful and fat. Joseph said that he also hoped we could go far enough to see the cross [a medicine cross carved into a tree]. One evening, then, he proposed that we should all set out the next day for Blue-stone Creek.

Between a proposal to go hunting and actual departure there is a large and perplexing divide. In the white man’s world, whether urban or rural, after such a proposal there would be plans and planning; conversation about timing and practical details would also help to build enthusiasm. In Joseph’s household, in all the Indian households of northeast British Columbia, and perhaps among hunters generally, planning is so muted as to seem nonexistent. Maybe it is better understood by a very different name, which is still to suppose that planning of some kind does in fact take place.

Protests against the hunting way of life have often paid hostile attention to its seemingly haphazard, irrational, and improvident nature. Before the mind’s eye of agricultural or industrial man loom the twin spectres of hunger and homelessness, whose fearsome imminence is escaped only in the bright sunlight of planning. Planners consider many possibilities, weigh methods, review timing, and at least seek to deduce what is best. To this end they advocate reason and temperance, and, most important, they are thrifty and save. These ideas and dispositions, elevated to an ideal in the economics of nineteenth-century and secular Puritanism, live on in the reaction of industrial society to hunters—and in the average Canadian’s reaction to Indians. And a reaction of this kind means that a person, even if inclined to be sympathetic to hunters and hunting, has immense difficulty in understanding what planning means for hunters of the North.

Joseph and his family float possibilities. “Maybe we should go to Copper Creek. Bet you lots of moose up there… 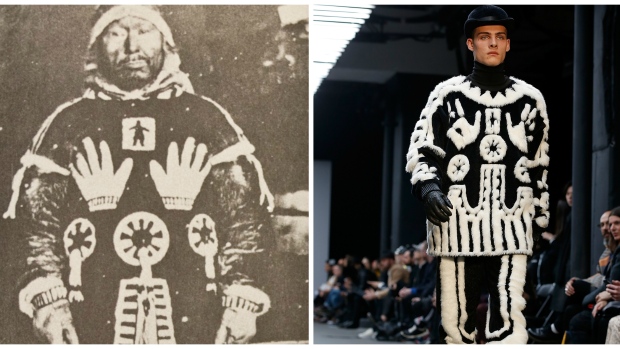 Neotenic Neurotypical disrespect for cultural meaning…it’s all about desecration by appropriation of authentic human creativity. Reduction of meaningful objects to crass novelty items is pornographic. Typical lack of “empathy” or depth of feeling in modern humans.

The U.K.-based fashion label KTZ’s fall 2015 men’s collection includes a number of garments based on traditional Inuit designs and a sweater that appears to be a replica of a shaman’s jacket, which a Nunavut woman says was used without her family’s consent.

“I was in shock, I was furious, I was angry,” said Salome Awa, who works as a morning show producer at CBC Nunavut.

“This is my great-grandfather’s sacred garment copied right down to the tee.”