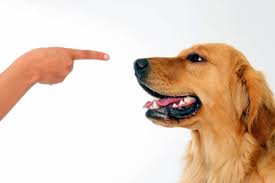 Like most humans, I tried using words to communicate with my dogs. Then I tried the “growls” and  other vocalizations that wolves use to communicate to pups and each other. What a difference!

Emotional communication between dogs and humans

(PDF: Can’t get a direct link to work:  google – emotional communication between dogs and people konok)

Although emotions are commonly studied in psychology, there is still confusion even in the definition of emotion and there are many competing theories regarding e.g. the components, the function or the emergence of emotion. In 1981 Kleinginna and Kleinginna collected 92 definitions from the literature, and even when they classified them on the basis of the emotional phenomena or the theoretical issue they emphasized, they got 11 different categories. This confusion may partly be attributed to the fact that researchers have focused on different components of the emotional reaction such as expression, behavior or physiology. Perhaps the complexity of the phenomenon which the former facts illustrate makes the definition and the modeling of emotion such difficult.

If we look at the word’s etymology we see that the term “emotion” dates back to 1579, when it was adapted from the French word émouvoir (“to stir up”). However, synonyms of the word likely date back to the very origins of language (Merriam-Webster, 2004).

Emotions were the subject of reflections of not lesser philosophers than Aristotle, Plato, Descartes, Spinoza or Hume. From the perspective of natural science, and ethology, the most important early impact has to be assigned to Darwin. Due to him emotions became no longer seen as dysfunctional, in the sense as something to reject or control (as some philosophers thought, e.g. Plato or Hume), but instead as something being functional and essential for survival (Kappas, 2002). He stated that signals in humans and animals are reflections of their internal state, and he also put an emphasis on the social and communicative function of emotions (Darwin, 1872).

In psychology, after famous debates whether emotion or the physiological arousal is the first (James-Lange vs. Cannon-Bard theories; James, 1890; Lange, 1885; Cannon, 1929, 1931), or whether emotions are results of a cognitive evaluation of general physiological arousal (e.g. Schacter and Singer, 1962) or they have distinctive autonomic patterns (e.g. Alexander, 1950), today a more or less general consensus is formed that emotion is a complex phenomenon (an umbrella concept) consisting of more components: expressive behavior, cognition, autonomic nervous system activity and subjective experience (e.g. Scherer, 1984; Panskepp, 2005; Plutchik, 2001).

We chose Izard’s definition of emotion because it emphasizes many aspects of emotions that we will discuss in the following sections. Firstly, it mirrors the functional-evolutionary approach of emotion, secondly, it could be applied to animals and humans as well, and finally, it emphasizes the complexity of the phenomenon (different components): emotions are specific neuropsychological phenomena, shaped by natural selection (and I would add, by socio-cultural selection), that organize and motivate physiological, cognitive, and action patterns that facilitate adaptive responses to the vast array of demands and opportunities in the environment” (Izard, 1992, p561).

In a previous post I discussed the Asperger reluctance or inability to VERBALLY describe our reactions to the environment to other people, who essentially demand that we “copy, adopt or conform to a word-based neurotypical social scheme. This “defect” is to many Aspergers, simply a blank phenomenon, or a “none of your business” privacy issue. My opinion is that “emotion words” EXIST as a social tool that teaches children to suppress and transform raw physiological reactions to their environment into “socially identifiable and approved” forms.

The fundamental fight or flight response is defused and redirected by using hundreds of “social emotions words” to transform and control the child’s natural animal behavior. This “social version” of “how humans are supposed to be” carries over into adulthood – people absolutely BELIEVE that words like cheerful, eager, and “self-esteem” are names of discrete physiology; that if the brain is “investigated” there are “clusters of neurons” labeled “happy, sad” etc. for every emotion imaginable: If this grossly inefficient scheme were the case, the brain would not have the energy nor capacity to perform its necessary vital functions. These “emotions” are socially-prescribed “feeling words” that are meant to promote social behavior by controlling instinctual reactions to the environment.

One obvious use of this “word control” is to convert healthy self-preservation (fight or flight) into “emotions” called shame, self-hatred, and self-loathing (a tactic common to many cultures) and by these to threaten the child with rejection and abandonment – which is a terrible thing to do to children. How often do we hear, “Nice little boys don’t fight back; boys don’t express emotion.” “No one wants to be friends with a boy who gets angry and hits other children” and “Nice little girls don’t use ‘bad words’ and never get angry with anyone; they always look cheerful and love everyone and try to please other people.” The translation is, if you don’t control yourself and obey me, I won’t love or care for you (= death.)

The reason that Asperger types have trouble describing our reactions (emotions) using word descriptions, is not that we don’t react to the environment, but we are literally shocked and astounded by “socially-constructed states of belief” about behavior; we are concerned with concrete external reality. The obsession with outlandish emotional displays over trivial “social status” control and competition leaves us feeling BLANK and / or astonished.  (And offended)

Search for articles by this author