Venus through time: All the depictions are physically viable women, except Barbie, who is an anatomical monstrosity. What does this say about socially modern culture?

Modern humans often view upper paleolithic (approx. 25,000 y.a.) “Venus figurines” as fertility goddesses, due to “exaggerated” body parts, but they may portray specific females. At this time there were no light-skinned Homo sapiens, or blue-eyed blonds – another 15-20,000 years would pass before these changes would appear in Eurasia.

Photo below: Last of the Andaman Islanders, who migrated from Africa 60-100,000 y.a. (debated?) to islands off the Indian mainland. A “living Venus” … Archaeologists have tried to “explain away” features on these figurines, such as wooly or coiled hair as “hats” or headdresses – really? 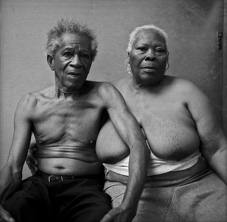