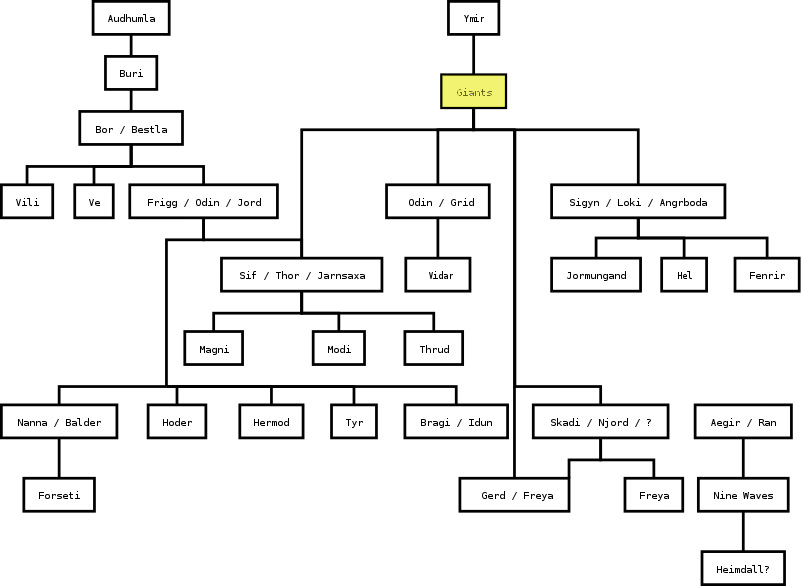 I’m not claiming that all giants or monsters in myth are Neanderthals or hybrids, but in the case of stories that take place within known Neanderthal areas of occupation, we ought to consider the possibility.

Norse Giants. Giants appear in numerous myths of northern Europe. The giants’ realm was a place called Jotunheim, located in Midgard, the center of the three-tiered Norse* universe. There they dwelt in a huge castle called Utgard.

Norse myths, like Greek myths, say that the gods fought and conquered the race of giants. Yet the gods and the giants were not always enemies. Friendship and even marriage could occur between them. Male deities mated with female giants. The mother of the thunder god Thor was a giantess named Jord, for example. However, the gods violently resisted all attempts by giants to mate with goddesses. (This type of prohibition is typical of “taboo” behavior that is  actually happening; cannibalism is another example.) The giant Hrungir built a wall around Asgard, the home of the gods, and for payment desired the goddess Freyja. But he received only a crushing blow from Thor’s hammer.

Many myths concern Thor’s conflict with the giants. In one tale, he journeyed to Utgard to challenge the giants. The giants beat Thor and his companions at several tests of strength but only by using trickery. In one contest, Thor lost a wrestling match to an old woman who was in fact Age, which overcomes all. Though the gods were not always good and the giants were not always bad, the struggle between the two groups constitutes one of the underlying themes of Norse mythology and often symbolizes the struggle of good against evil.

Humans share an instinctive fear of snakes and spiders with Chimpanzees, which likely dates back in time to before our lineages split from each other. It is plausible that as Homo sapiens, we retain fear of other human species with which we co-existed over the previous 100,000 years or more; a type of “instinctive hysteria” that is activated when modern humans “see something” (usually a bear) and identify it as being a big hairy primate or ape that survives today in  wilderness areas.