From PBS program promotion: “Neuroscientist David Eagleman explores the wonders of the human brain in an epic series that reveals the ultimate story of us, why we feel and think the things we do.” Oversell? Yes. Note the ever-present collective “we” which is the small group of white (male) academics and their funders, who really do believe that they represent the highest level of humanity. Will these guys ever get it? There are 7 billion other human beings on the planet.

I’ve been watching the PBS series “The Brain” with Brian Eagleman, a “feel-good” interpretation of the wonderful world of “brain stuff.” It’s mostly a rehash of longstanding clichés and re-enactments of old “experiments.” By the way, it’s not an experiment to stop passers-by on the street, ask some generic question, and then conclude that six responses reveal definitive, pan-human brain wiring.

The focus was select, educated white people (friends and colleagues?) whose cocktail party “vibe” supposedly represents all humans. Of course these people “get” each other, at least to the extent that they share social class, race and an affluent lifestyle.

Once again, it’s astounding that only “fun, warm, lovey-dovey” behavior is counted as social behavior. All that “evil stuff” like war and genocide, is an aberration created by  psychopaths who pick on nice normal people. Epidemic group violence somehow “doesn’t count” as typical social behavior: that’s the power of cherry-picking history to exclude perfectly normal everyday cruelty, violence and abuse. The consistent social reality is that psychopaths, sociopaths and just plain mean and greedy people are necessary to the social hierarchy.

A program on the brain couldn’t possibly avoid autism as the prime example of the “brain gone wrong” – and a brief, self-congratulatory (on the part of neuroscientists)testimony by Asperger John Elder Robison, (star witness for salvation by techno-normality) was the only example of an “autistic person” presented. Robison was “saved, redeemed, cured” by transcranial magnetic stimulation. If you believe the “we can save you poor miserable outliers” propaganda, this is the message:

No evidence was provided that the magnetic stimulation was the actual precipitator of the self-perceived change in Robison’s mood – coincidence is held forth as proof of cause and effect. In fact, Robinson states that he simply became “aware of” being social due to the “event” and began paying attention to that aspect of his life. No evidence in the form of repeatability – standard scientific requirement in actual scientific endeavors -was offered or mentioned.

The danger is that this procedure, like many previous cruel “interventions” in the history of psychology / psychiatry could be the pathway to implementing “nice and friendly” (sanitized) destruction of brain function (lobotomy) which follows on current “drug” lobotomy, which replaced the “ice pick” lobotomy, none of which deal with the human brain as the source of complex manifestations of living human variability. The amount of “profit” in cranial stimulation will likely determine its popularity. A fad treatment for the wealthy; a novelty.

We (specifically, ASD Asperger types, are not lab rats, lab monkeys or lab chimps: we are humanity’s neurodiversity and (possibly) it’s genetic diversity.

The obesity epidemic/ Photo 1: a physical manifestation of psychological neoteny. Paedogenesis – the retention of juvenile traits in mature adults – is one result of neoteny. This process has gone so far that individuals are turning their bodies into “big babies” as an external display of infantile narcissism. Helplessness is the dominant theme, just as it is with infants. This “faux baby” body is achieved through lifestyle choices, not evolution.

Extreme neoteny epidemic/ Photos 2-4: skull does not develop into that of an adult but retains infant – child proportions. This is the result of domestication-through sexual  selection. Modern social humans are the product of domestication for “tame” behavior, and like puppies, genetically-linked traits are preserved. 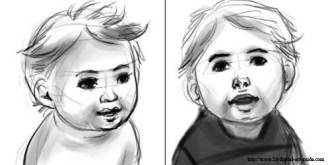 Mothers who present their young girls as sexually mature may not realize that they are attracting pedophiles.